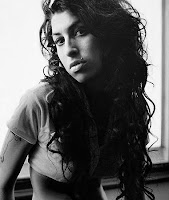 I am an Amy Winehouse fan. I'm a little tired of her buzz track 'Rehab', the first single from her latest album, because even though it's in the Top 10 currently, it's been in circulation much longer than the album. But Back To Black is great from start to finish, so there are plenty of other reasons to like her, too.

The third single from Back To Black is 'Tears dry on their own', a spunky Motown-inspired lost-love-survivor song filtered through Winehouse's gritty northern soul sensibilities. I am struck by the lyrics that begin the second verse: 'I don’t understand / Why do I stress a man? / When there’s so many better things at hand / We could've never had it all'.

Stress a man. It's a slightly unusual turn of phrase, but I'd heard it before this. In my parents modest but eclectic record collection is one of Eydie Gorme's albums from the sixties (before she morphed into the caricature of a bawdy Las Vegas relic most people view her as today.) Don't Go To Strangers is, like many of her albums, a collection of traditional pop standards and show stoppers from Broadway musicals, and she gives powerful but nuanced readings of them.

Eydie sings 'If he walked into my life' from the hit musical Mame (written by Jerry Herman in 1966.) She won the 1967 Grammy for Best Female Vocal Performance for it. It's a love-lost-reminiscer song that's maybe a degree more hopeful than 'Tears dry on their own'. Quoting the second verse: 'Were his days a little dull? / Were his nights a little wild? / Did I overstate my plan? / Did I stress the man? / And forget the child?'

My first question: is this striking enough to be more than a coincidence? My second question: if so, is it possible to gauge the likelihood that Amy Winehouse was influenced in some way by 'If he walked into my life'? (Not necessarily by Eydie Gorme's version, but by the song?)

You can decide for yourself the answer to the first question. Since for me the answer is 'yes', off I go to see if I can answer the second one.

Many influences are attributed to Amy Winehouse. Besides the obvious Motown references are the torchy standard singers like Sarah Vaughan, Ella Fitzgerald, Dinah Washington and Etta James. But none of these women made a preserved recording of 'If he walked into my life'. However, another torchy, slightly less standard singer did: Shirley Bassey. I can see from a recent compilation that Bassey recorded 'If he walked into my life' in 1968, but I can't trace it to an album (she released three in 1968, but none of them list the track) or determine if it was a single; it doesn't seem to have charted. 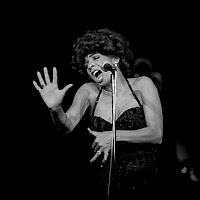 Shirley Bassey is Welsh, and enjoyed considerably more success in the UK than she did here in the United States ('Goldfinger' aside.) Amy Winehouse is from North London, so I would say it's very likely that she has more than a passing familiarity with Shirley Bassey, and may have heard 'If he walked into my life' that way.

Beyond that, it's hard to establish a connection between 'If he walked into my life' and Amy Winehouse. My investigation might have ended there.

But here's the kicker, the key piece of information which would have made this easier from the beginning: I forgot to check the songwriting credits for 'Tears dry on their own'. Amy Winehouse is known to write much of her material; she gets the sole songwriting credit for more than half of Back To Black. But she wrote 'Tears dry on their own' in partnership with Nickolas Ashford and Valerie Simpson. They might be best known as the Ashford & Simpson who scored their own hit with 'Solid' back in 1984. But they have a long roster of amazing hits written for other artists, including 'Ain't no mountain high enough' (Marvin Gaye and Tammi Terrell) and 'I'm every woman' (Chaka Khan or Whitney Houston, take your pick - I pick Chaka.) 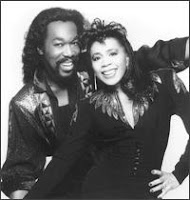 As hugely successful songwriters for the past five decades, Ashford & Simpson are undoubtedly familiar with standards like 'If he walked into my life'. So whether Amy Winehouse heard it in London or Ashford & Simpson heard it in the States, I can't say, but I'm quite confident that those lyrics were filtering around in the subconscious of somebody in the room when 'Tears dry on their own' was written.

Don't you feel so much better now?
† †
Labels: LIGHTS IN THE WOODS [essays on special topics in music]
Newer Post Older Post Home