BATHERS - THE ANGEL ON RUSKIN 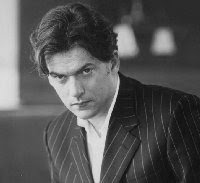 If one is a devoted fan of an artist or group who stops producing music, after one has collected everything they recorded, the next (il)logical step is to become a completist: branch out to the guest appearances, side projects, previous and successive incarnations... For those of us who are Cocteau Twins fans, and particularly fans of Elizabeth Fraser's voice, there's a sizable trove of her non-Cocteau recordings to be cherished. Some are easily sourced, like her work with Massive Attack or This Mortal Coil. Others are much more obscure, like the rare Bom single 'Roach'. Somewhere in between is Sunpowder by Bathers.

That introduction is my way of admitting that I may never have paid any attention to Bathers if I weren't an Elizabeth Fraser completist and Bathers hadn't persuaded Liz to guest vocal on four tracks for Sunpowder. But I'm glad I did find Sunpowder because it's a beautiful chamber pop album that sounds sophisticated and romantic but also folksy and warm, and Liz just puts it over the top. Bathers are the project of Scotsman Chris Thomson, and I figure the Scottish connection may have something to do with Liz's involvement. Thomson is at the opposite end of the vocal spectrum from Liz, hailing from the Tom Waits/Nick Cave school of not-much-pitch-but-expressive-anyway. An art school graduate, his songwriting is worldly and capable of poetic density. I am fond of his double entendre about a Scotsman and a tyro when he describes his first encounter with an angel: 'I saw her up there with my own green eyes'.

The song that contains that line, 'The angel on Ruskin', is the standout track from Sunpowder. Subdued acoustic guitar, brushed drums and electric piano sound as though they originate in a coffee house that is so transfixed no one is bothering to drink. Thomson and Liz Fraser share verses, and then she sings and hiccups backing vocals to his choruses and bridge. The lyrics are mysterious at first glance, gradually unfolding their meaning.

The title, and even the opening line - 'Believe it or not / there's an angel on Ruskin' - tempt one to imagine a heavenly winged creature casting divine light on John Ruskin, the art/architecture/social critic of the nineteenth century. Rather lofty. But closer inspection makes that scenario seem less likely. References to chimneys, eastern stairs and paintings suggest that 'Ruskin' refers concretely to the Oxford School of Drawing and Fine Art that John Ruskin founded, and that still bears his name. 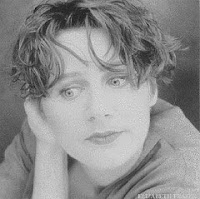 And if this is a really an angel, she's quite the badass, and little about her is transcendent. 'She trashed my car / She trashed my paintings', and later, 'You would fall / should you look into her eyes'. In truth, this is a black-haired co-ed who has broken our narrator's heart. By the end of the song the angel on Ruskin has become the stranger on Ruskin, 'And memory lies / like a girl on the wing'. Sweeter, what hasn't changed is our guy's romantic nature: 'I was always in love's power / Down on my knees'.

The incredible lushness of this song elevates an ill-fated college love affair to a cinematic epic with sweeping montages of neogothic rooftops and breathless encounters on staircases. The cruel girl (who likely has no idea she's starring in this tragedy) is transformed into a British Holly Golightly, whose beauty and capriciousness are just as capable of injuring men as seducing them. Elizabeth Fraser's angelic voice further blurs the gap between reality and myth. She makes Thomson's voice sound all the more awkward and sophomoric by contrast, though it has its own loveliness, all of which is well-suited to this song.

From what I can tell, Sunpowder is currently out of print, but if you choose to track it down there are some stunning moments awaiting you, particularly 'The angel on Ruskin'. I only hope Elizabeth Fraser will continue to find projects like this, so we can experience more of her singular talent, and encounter other singularly talented artists along the way.