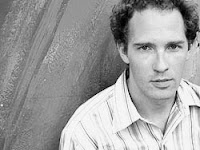 Last night, Dan Snaith's (AKA Caribou) first spontaneous performance moment took place after the encore was finished. He pumped his fists in the air, twice. On two earlier occasions he had asked the audience if the vocal levels were high enough (they weren't) but that was out of necessity, and he would have kept his speaking to the occasional 'thank you' if he could have.

It's disorienting to finish a show feeling a little bad for the performer. Not because he gave a bad show, or because he hoped his show would be one thing, and it turned out to be another thing; neither of those were the case. How to explain...

Caribou's newest album Andorra is a lovely intersection of Beach Boys and Pale Saints. Caribou's show last night, however, was a much louder intersection of Who and a marching band. Dan makes his music by himself, and the prospect of touring with an ensemble seems to be a disconnect for him. He has a drummer, but he also plays drums, and when he does, 95% of his playing is a note for note match to his drummer. He has a guitarist, but he also plays guitar, and when he does, 80% of it is a note for note match to his guitarist. This doubling does strange things to the live mix. It didn't help that the sound check seemed to have been a failure, too; they were four or five songs in before the person at the board figured out how to get the vocals up and the guitar situated.

That's all forgivable, if unnecessarily overcomplicated. Dan presented this live music as a wall of loudness, with projections of computer generated psychedelic images behind the band; the allusion was very clear. But unlike the sixties aesthetics he clearly admires, his music is extremely obsessive and cerebral. His bass and guitar parts are completely repetitive; when there is a melody, it's a one or two bar affair that is repeated again and again. His drum parts on the other hand are incredibly complex, and his drummer proved to be quite the virtuoso, but when he and his drummer were playing the same complex arrangement simultaneously, it became clear that every beat and flourish had been scripted, and some of the life drained out. Even more, I realized that the entire performance was sequenced to a click track - even the pauses between songs - so that programmed synth parts and the projections could be seamlessly incorporated.

There's an undeniable visceral impact from drumming and spectrum-filling sound. But if that had been taken away, the show would have been a control freak having three session musicians play off a score. (I wonder if when he hired them he handed them an actual score of the show to learn.) I had a completely different impression of those same songs when I heard the recorded versions.

When he started making albums, Caribou was more of an electronic project. If Depeche Mode or Daft Punk pre-program three quarters of their performance, it doesn't change much. Attempting to do the same thing with live musicians and analog instruments is much more harmful to the experience. I watched Dan, hunched like Dr. Frankenstein's assistant over his kit, head below his shoulders as he drummed, while his session drummer sat across from him, in a relaxed posture as he played hard, but obviously bored. And I felt bad for him.
Caribou official website
† †
Labels: LIGHTS IN THE WOODS [essays on special topics in music]
Newer Post Older Post Home