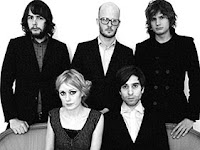 When I saw Shout Out Louds in July, it was as a casual fan who had picked up the first album but not really clicked with the band. That show made a much more enthusiastic fan of me; they are very confident and great fun live, and they're such an adorable bunch, really.

This is the first time I've ever seen a band twice on the same promotional cycle, and it was interesting to see the changes that they've made over the last few months. Shout Out Louds have worked out some segues between songs, so there were some seamless transitions last night that hadn't been there before. They've greatly expanded 'Impossible', with an extra verse and a bridge that aren't on the recording. (I would be thrilled to hear them perform it in the style of the 'Possible remake by Studio', whoever that is; that version is quite lovely.) It was also nice that the accordion was in working order this time around, meaning that we got to hear 'Parents' livingroom'.

Some of the best parts of the last show I saw were still there, though. The 'Train in vain' break during 'Very loud' is still fantastic. And 'Hard rain', which they only played because of the busted accordion in August, and which has since become my favorite track on Our Ill Wills, now has pride of place in the encore.

I like that while Shout Out Louds can be counted on to reference the well-established indie pop cannon - sixties, Cure, Smiths - it's obvious that they're old enough to really wear a new wave mantle confidently. So I hear other references, too, from Cars to Icicle Works, even Chameleons, and those are what make them distinctive to my ears.

In July the audience was smaller but more enthusiastic. Tonight there were more people who were too aloof to dance (get over it people; you'll never be that cool.) I hope that didn't leave Shout Out Louds feeling unappreciated. They gave another great show. It would have been great to hear their stellar cover of 'Man in the moon', but I quibble...
Shout Out Louds official website
† †
Labels: LIGHTS IN THE WOODS [essays on special topics in music]
Newer Post Older Post Home