A gun and her 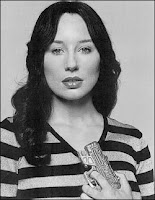 A few weeks ago there was a small buzz about Tori Amos's concert in Chicago, particularly her shocking performance of 'Me and a gun' from her first album Little Earthquakes. I didn't see the show, only the video clip. I've been thinking about it off and on for the past few weeks, so it's time to sort it out.

I am definitely a Tori Amos fan, and I always kick myself when I think about Little Earthquakes. It came out during the summer I was interning with a concert promoter; I had the opportunity to see Tori when she came through, for free, in an intimate venue... and I turned it down. I remember the original controversy about 'Me and a gun'; some people felt that while Tori's music had amazing resonance with archetypes of the female, she crossed into exploitative territory by making money singing explicitly about rape, no matter if it was autobiographical or not.

I'm not sure if I understand that argument, but it didn't really matter to me. I have never liked 'Me and a gun'. Not because it's a bad song; it's an incredibly moving performance art piece that happens to throw Little Earthquakes off balance because it operates in aesthetic areas that are mutually exclusive from the rest of the songs. So maybe it's more accurate to say that I appreciate the song, but I wish it existed in more fitting context.

Now, in Chicago some fifteen years later, Tori seems to be pushing the song further into the performance art realm. She has performed the song in the past, a cappella as it is on the recording. But this time she performed it with the band, wielding a particularly aggressive vocal manner, and holding first a knife and then a gun to her own throat. By all accounts the effect was extremely raw and cathartic.

For me this song and this performance don't call to mind the work of other pop musicians and their concerts. They call to mind the Viennese actionists and Paul McCarthy, performance artists who, among other incendiary things, engaged in acts that were harmful to themselves or posed the risk of harming themselves. Their audiences were forced to confront the degree to which they were complicit in the harm by remaining to watch. Based on the descriptions I have read and heard of these performances, I think I would have a very hard time witnessing them. For example, one of Mr. McCarthy's pieces consisted of him stuffing as many hot dogs as he could into his mouth, then dousing himself in emetic and trying not to vomit. If he did, he was likely to drown in his own bile.

I have a difficult time watching the footage of 'Me and a gun' in Chicago, and I think I would have had an even harder time seeing it in person. That's not to say that it doesn't have value, and it certainly isn't as extreme as the work of the Viennese actionists. But it is not entertainment, and I think Tori would agree with me about that. She is not performing it with the intention of providing diversion or aesthetic stimulation, but to convey the harrowing experience directly, with as few artistic fetters as possible. In listening (and in watching) we are forced to confront our roles as passive witnesses to a brutal, inhumane act.

I own and love plenty of pop music that disturbs me, takes me out of my comfort zone, and asks me to think about unsavory things. (That would be quite a playlist, wouldn't it?) I guess the bottom line here is that 'Me and a gun' (with props or without) doesn't operate like a pop song, and while it meets other criteria very well, it is awkward and distorted in a pop music context. Tori Amos is brave to have written and recorded it, and she is brave to perform it. She has issued other songs as singles to raise money for organizations that combat violence against women. I think 'Me and a gun' could have achieved a greater impact and a higher level of discourse if it had been allowed to stand on its own.
Tori Amos official website
† †
Labels: LIGHTS IN THE WOODS [essays on special topics in music]
Newer Post Older Post Home