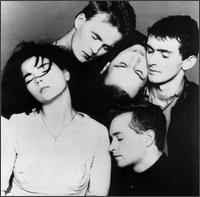 In 1988 Billboard Magazine established the Modern Rock chart, reflecting some kind of critical mass in that genre. It was a red carpet of sorts for Sugarcubes, who burst onto the scene that year. Possibly because of the relative isolation Iceland provided, they had a fresh perspective on the traditional elements of pop and rock, taking so much that was familiar and putting a new spin on it.

Even though its landmark tracks - 'Birthday', 'Coldsweat', 'Deus' - didn't make the Modern Rock chart, Life's Too Good was an instant Modern Rock milestone, helping to carve out room in that category for music that wasn't immediately accessible, or even radio-friendly, but that won an audience through its undeniable accomplishment.

To this day I am mystified that 'Blue-eyed pop', another track from that abum, is not heralded as a retrospective classic. I rediscovered the song a few years ago, and twenty years later, it's an astonishing little tour de force. Barely two and a half minutes long, it takes a blender full of disparate musical influences and somehow makes a delicious synergy out of it.

At the start, 'Blue-eyed pop' is a Gang Of Four reference (think 'Damaged goods') with a angular guitar riff and the kind of bass line that shows how rock learned most of what it knows from R&B. Then Einar starts talk-singing and Bjork does dissonantly harmonized back-ups, all in the manner of B-52's. The electronic percussion added in the first bridge is taken from Joy Division's toolkit. In the second bridge, the whole instrumental scheme shifts to David Bowie's 'Let's dance', which is to say, Nile Rogers disco funk. Bjork takes over the lead vocal, wailing like some muscular cross between Samantha Fox and Yoko Ono.

How on earth does all that come together? Scrutinizing the song too closely almost makes it disappear. One's attention is better spent on the lyrics, a willfully naive jumble that makes a self-conscious circle around the traditional pop song without ever really going inside. 'Blue-eyed pop' is an unedited love letter to pop music; but instead of just being one, it fleshes out the way pop music inflects the rest of our lives.

Einar and Bjork go out for the evening, and like space aliens they are drawn to and captivated by the pop music they hear in a disco. They thrill in their visceral response to it, and they indulge in all the behavior it provokes: dancing, eating street food, throwing it up, and going home to hook up. 'It's just fabulous.'

Bjork waxes philosophical about this experience, noting how its immediacy is contagious, giving the listener a heightened sense of the potent friction between present and future. 'Something wonderful is about to happen / I feel perfectly ready.' 'Everyone is close to laughing,' she sings, making a beautiful metaphor for the latent energy in pop music that goes along with all its more obvious energies.

This is expressionism along the lines of Frank Stella's massive enameled confections; it uses the vocabulary of pop to comment on pop itself. 'Blue-eyed pop' takes us back to the exhileration of our first dionysian experience of pop, with its most sacred and its most profane elements bundled into one. It's just fabulous.