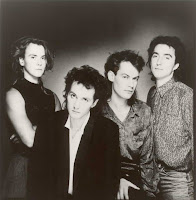 Who is to say why Bolshoi never got the attention they deserved? In the mid eighties they were using a musical palette that was at its peak of appreciation, and generally doing it better than many of the other bands who were getting more attention for it. 'A way' is one of the great character studies of alternative rock; decades later it snarls and condemns with as much acidity as it did then.

By 1985 much of the terrain that the post-punkers had staked was pretty well mapped out; the second half of the decade was much more about refining a sound than pioneering one. Punk was well in the rear view mirror, and bands like Bolshoi stretched for structures, arrangements and musicality that were elaborate and refined, without letting go of the sharp angles and hard edges that made alternative music dark and edgy.

'A way' begins with a creeping swell of keyboards and wandering guitar, but the setup is brief; with a flourish of bass and drums, the primary theme takes over and drives off. Bolshoi don't beg immediate comparisons to Queen and Frankie Goes To Hollywood, but they approach the arrangement with a similar eye for bombast and theatrical impact. It's easy to imagine an orchestral arrangement of the song with a pizzicato string section taking over the guitar part, and brass playing the accents in the chorus.

Over and above the haunting portrait of a lady presented by the lyrics, in several instances the lines are clearly written to give the effect of the spoken word as much as the sung. We have a narrator who would be at home in a production of Sweeney Todd, sing-telling his story with only a fleeting compassion for his subject. Early on he sings 'So let's not fight OK, yeah...', the last word trailing off tunelessly but wholly expressing the caustic sarcasm of the line.

We don't know our subject's name; it seems she is the narrator's sister, and he sings the story of her life as he has witnessed it, addressing her directly in the second person. The song begins with the girl's engagement, prompting our narrator's flashback through her life. Before she met her fiance, our heroine was well inclined to trade on her good looks, teasing boys into spending their money on her. That would be innocent enough, but the second verse darkens the mood, describing skeletons in the family closet and gossip on the street. The family's shame is kept a mystery.

The bridge contains one of the most chilling couplets in modern music: 'Innocence and lies don't make a perfect match / Leave your door unlatched'. The next two aren't bad, either: 'I know a word can be untrue / and yet still move you'. Things are not looking well for our girl. Shifting chillingly into the third person and the past tense (has she died?) the final verse tells just enough to end the story, but leaves us guessing. It was a white wedding, even though everyone seems to have known better, and soon a baby joined the family. But the mood of the song have never lightened, and we certainly don't get off with a feel-good ending: 'And all the time they stuck the knife in / Pulled it up and twisted around'.

Was the family shame their daughter's pregnancy and abortion? There are hints that it even may have been incestuous rape; who else would be coming through the unlatched door? Or was it some kind of prostitution? ('And all the times they bring their friends 'round / Dress you up, show you up'.) Looking back, the song has been loaded with entendres of crossed legs, drawn curtains falling open, and we understand why even the lighter lines have been ominous. Brother narrator struggles to make sense of it himself, believing but still having trouble understanding. His sister seems barely to have escaped into a marriage clutching what little honor she had left.

Despite the barrage of words in 'A way', what makes it that much more brilliant is a minimal chorus with a richly ambivalent metaphor. It's easy to see how the song's title is often mistakenly written 'Away'; the syntax of the song suggests it at one point ('and then you'd toss your hair... a-way') and there are a host of things she might want to escape. But the deeper meaning is literally 'a way', as in 'a means' or 'a strategy', reinforced by the rest of the chorus - 'Yes you get by'. As fun and innocent as our heroine's childhood was, too soon her life has been reduced simply to getting by, scraping through, choosing the least of all evils.

In his last words, again more spoken than sung, brother narrator underscores the tragedy of his sister's life one last time. 'Well that's fine... fine... fine...' It's not great, not even good, simply fine, which is probably the best his poor sister could hope for after the tragedy that has been visited upon her. As danceable and alluring as 'A way' is, it's a wrenching song with a beautiful bleakness. Bolshoi may never have matched this achievement, but they set the bar well beyond the reach of most bands with this song.
Bolshoi official website
† †
Labels: STRANGERS IN OPEN CARS [songs you should know]
Newer Post Older Post Home