Got into my head 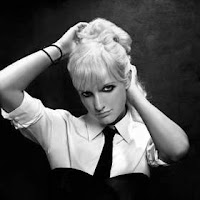 Nearly all good artists occasionally make a not-so-good song. We usually take it in stride, remembering that in pop music, artists are only as good as their next songs, anyway. But when a not-so-good artist makes a good song, it puts us in more of a predicament. We have a harder time being generous when the exception cuts in the opposite direction.

Critics relish the opportunity to point out the clay feet of even the most accomplished artists. It's a sign of critical integrity and courage to 'not believe the hype' and pan something by an artist who is rarely panned. But critics similarly seem to be much more reluctant to stick up for something good if it comes from someone they've already dismissed. And this is the more courageous opportunity, critically.

Take for example the almost universally ostracized Ashlee Simpson. Got the job through nepotism. Used an reality show to document that she was totally dependent on studio conditions. Had some horrific live/not live snafus. Got some plastic surgery. This is not a woman who is in danger of being taken seriously as an artist.

But her recent single 'Outta my head' is good, it must be said. I don't think it will be a hit, but it's good, and here's why: It is a startlingly accurate version of the early eighties new wave disco track template, and it would be a classic new wave obscurity today if it had been released in 1983. It won't succeed now because it's too faithful to its reference points, and doesn't contribute anything to them to justify the passing of 25 years.

Take two parts 'Burning up' from Madonna's classic first album, and one part Dale Bozzio of Missing Persons. And that's it - the chord progression; ultra-programmed disco instrumentation (canned Nile Rodgers, if you will); the manic vocal that's short on meaning, short on vocal skill but long extra long on kooky character. It's the clearest xerox copy of that moment in pop history I've ever seen.

Ashlee has skimmed the play book of one our most accomplished eighties devotees, Gwen Stefani. The poor video for 'Outta my head' makes that additionally clear. Ms Stefani is far more adept at updating her influences, though. Possibly the blame should go to Timbaland, who produced Ashlee's single. He is usually also quite good at making old things sound new again,

So I'm going to take a stand and endorse 'Outta my head', even though it's been almost universally panned thus far. Unfortunately, rather than being a great new song, it's the great lost dance hit from 1983, and since I liked that year more than a little, that's just fine with me.
Ashlee Simpson official website
† †
Labels: LIGHTS IN THE WOODS [essays on special topics in music]
Newer Post Older Post Home