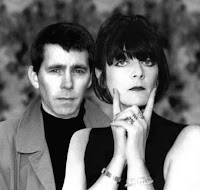 I'll admit that there was a time when I enjoyed bands like Skinny Puppy, Clock DVA and Chris & Cosey particularly because of the persona their music projected: darkly glamorous, dangerously exotic, unapologetically sensational. I haven't listened to much of this for a long time, but there are a few songs that have transcended that morbid niche. 'Dr. John (sleeping Stephen)' by Chris & Cosey is one of the most enduring. It is one of the most disturbing pop songs I've ever heard, but it's so beautifully crafted that it succeeds on its own terms, luring us in, knowing that we are unable to turn away.

'Dr John' is not a good representative of Chris & Cosey's general aesthetic. Most of their arrangements are not as innocuous, as accessible. Many of their songs carry their weight more lightly, with a higher center of gravity, even as they explore dark themes. While tribal influences can be heard regularly in their percussion, rarely is it so explicit. Cosey Fanni Tutti speaks lyrics as often as she sings them, but usually in structures closer to conventional verse and chorus, rather than narrative. If you scroll through the collected works, few songs are as slow and deliberate as 'Dr. John'.

With drums echoing from the other side of a large room, a bass note repeating like a slow telegraph, and the abstraction of chanting monks swelling and receding, the effect is immediately ominous. This could be the soundtrack of a secret ritual, possibly dangerous to unauthorized witnesses. A tribal, possibly voodoo element arises with the addition of congas, shaker and wood flute. Later comes the most characteristic Chris & Cosey musical element, a jagged synthesizer sound that pokes against the smooth current of the rest of the instruments. A piano - a remarkably naturalistic choice for Chris & Cosey - meanders around in the background, mocking the song's tension with its aimlessness.

Cosey begins her story in a hushed voice, as though she is reporting from inside a closet, or just behind a curtain at the scene of this mysterious ritual. As it turns out, there are only two participants, and they are the two men named in the title. With an opening line of literary quality, we receive the climax immediately, with all else that follows a carefully prolonged series of aftershocks.

'As Stephen lay sleeping / the tie was pulled around his neck / Pulled tighter and tighter / until his feeble struggle was no more.'

We receive only one piece of information about Dr. John, but it conjures a full biography very easily: He needs the experience of death, but 'if he killed himself he could only experience death once / If he killed others, he could experience death time and time and time again.' Though Stephen dies as the song begins, we learn more about him. He was a hustler, apparently troubled since his wrists are still bandaged from a recent suicide attempt. A short time ago he accepted Dr. John's proposition in hopes of earning some money, and then fell asleep, unsuspecting.

Cosey narrates the action a little breathlessly. The Doctor continues the ritual he has established for his victims: he undresses and washes the body, lays it out naked in repose, mourns it as though it were a relative, then joins it on the bed, positioning mirrors so he can watch himself. It doesn't take much to infer that necrophilia follows murder. Cosey breaks a few times for an antiphon that is the closest thing 'Dr. John' has to a chorus, and I have always been frustrated in my attempts to clarify what she says. The simplest interpretation is 'This was a case... of Doctor John' - she speaks the name as though the identity of this man has just been revealed to her; in the way a victim might recognize and speak the name of the killer just before the fatal act.

Chris & Cosey have always worn their fascination with sexual perversion proudly; it figures strongly in the musical, cinematic and literary influences they list. They have also positioned their music as a deliberate attempt to provoke deep emotional responses in the listener, through techniques ranging from the subliminal to the blatant. While 'Dr. John (sleeping Stephen)' makes aesthetic sense in the context of their work, it is distinctive for its subtlety and its masterful storytelling.

It's difficult to craft an essay about 'Dr. John' that would convince the average reader to seek out this song. It is not as much to enjoy, as to experience because that experience is unique and remarkable. When Cosey practically whispers the final ironic word - 'Goodnight' - we look around the room, wondering if anything like what we have just heard could be happening somewhere in the world tonight. We confront the possibility of these actions in a way we might not have otherwise. We may not empathize with these men, but they live (and die) in this song, despite our desire to deny them. Here Chris & Cosey draw the curtain back further than most on these disturbing corners, but I am awed by their virtuosity in doing so.
Chris & Cosey official website

04/20/10 ADDITION: After a nudge from reader Eli, I finally sought out Ms. Tutti to ask her to clarify the lyrics that eluded me in 'Dr. John (Sleeping Stephen)'. Bless the internet age for giving fans the opportunity to respectfully approach artists, and bless Ms. Tutti for so graciously responding; she tells me that 'Dr. John (Sleeping Stephen)' "is also one of my favourite and enduring tracks. One that grips me and transports me every time we play it live."

It turns out that in Ms. Tutti's construction of the song, there are in fact three men: the murdered Stephen, the unnamed serial killer, and Dr. John, the institutional psychiatrist who assesses the killer. The antiphon is: 'This is a case that faced Dr. John.' She also mentioned that the name of the doctor is an oblique reference to Dr. John the Night Tripper, who put his own Zydeco spin on voodoo music.

When a fan falls in love with a song, it is personal experience that is not likely to align exactly with the artist's own experience of the song. There is nothing wrong with that. Many thanks again to Cosey Fanni Tutti for sharing with me both this song and her privileged relationship with it.
† †
Labels: STRANGERS IN OPEN CARS [songs you should know]
Newer Post Older Post Home