SINEAD O'CONNOR - JUMP IN THE RIVER 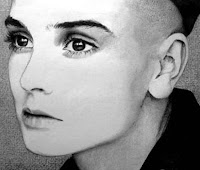 Sinead O'Connor is, for better or for worse, an artist who sings about her beliefs. That can yield amazing results, like 'Black boys on mopeds', or songs that are virtually unlistenable, because their didacticism pummels all aesthetic considerations. 'A prayer for England' is possibly the worst thing Massive Attack has ever done, and I hold Sinead completely responsible.

Early in her career, she was willing to sing about other things besides her beliefs, and her first two albums are classics. I still enjoy early hits like 'Mandinka' and 'I am stretched on your grave', but the song to which I return most often is 'Jump in the river'. It is almost as though it were written and performed by someone else, considering all the ways it differs from her norms. Possibly this is the influence of Marco Pirroni, the only co-writer with whom Sinead worked for that album (and this song was recorded earlier for inclusion on a movie soundtrack.)

I think if Sinead wrote 'Jump in the river' today it might go, 'I love you though you have AIDS and you could have infected me / and people are idiots for treating AIDS patients like lepers'. Fortunately, she used an incredible amount of subtlety and nuance instead, and even rarer for her, a wry sense of humor.

What a rich declaration of lopsided love, so expressive and so distinctive, to take a colloquial kiss-off and turn it on its head: 'If you said jump in the river I would / because it would probably be a good idea'. It's not hooky enough to be a proper chorus, but it's a perfect refrain, and it stands as an oddly tender counterpoint to the bitterness and futility of the rest of the song.

Sinead uses inflection and detail in 'Jump in the river' possibly more skillfully than she ever has since. In this song she is caught between me-vs-you and us-vs-them, and while she comes down on the side of us-vs-them, it's not simple or uncomplicated. She finds herself depending on people whom whe knows are biased and negative for information about her lover's health. When she sings 'You're not supposed to be here at all' she's mocking those people, but when she follows that with 'It's all been a gorgeous mistake' the words are hers alone, sarcastic and defiant.

There are two images that pull amazing weight among these lines. The first does everything to paint the picture of her relationship that the refrain hasn't already: 'When I kissed you / you didn't mind / I thought I tasted of too many cigarettes / but you tasted like wine'. The comparison describes so well the rough edges of the relationship, and how she draws self-esteem from it as much as love.

The second is the crystalizing moment of the song, arriving when its momentum has lulled after the second refrain. Almost as an aside, she muses, 'There's been days like this before you know / and I liked it all / Like the times we did it so hard / there was blood on the wall'. All the previous oblique references are unexpectedly trumped by this moment of bluntness. With it, the song blooms into new lushness as a keyboard washes over the arrangement, replacing the feedbacked guitar and propelling the song out of the domain of Jesus & Mary Chain and into the realm of INXS. How intricate a bridge, laying bare this woman's complexities; she is shy enough to use a high school metaphor for sex, but fierce enough to have 'done it' roughly enough to break the skin. We sense that this moment might be the first disillusionment of her adult life, and marvel at the depth of her stolidness irregardless.

The blood, of course, epitomizes the threat of infection, making the risk she has taken all to clear (whether she realized it or not at the time.) It also completes the triumvirate of fluids in the song: water, wine and blood. With that in mind, the lines 'Sick one, clean one / The best one God ever made' achieve their full religious resonance.

There is such a diversity in Sinead O'Connor's early work: rock, pop, punk, hip hop, folk. It's a remarkable synthesis, tied together by her passion and her honesty. 'Jump in the river' is the sleeper of the bunch, the track in which one of the most powerful vocalists of our time barely raises her voice above a murmur. It's the track that starts with a gunshot and ends with a ticking clock, just a matter of time... Too bad that description seems to describe her career just as well.