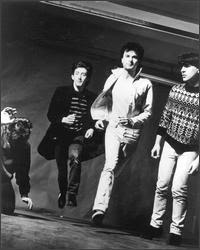 Like an express train from the early eighties, Chameleons embody the post-punk aesthetic so purely that they completely inhabit the era and completely transcend it at the same time. Their music is practically architectural: if you are not listening to it in a dark club, it will remind you of one. It will make you wish you were in one. Their influence on two full generations of musicians that followed them is undeniable, but at times it seems like the influence is subliminal. I can't think of another post-punk band whose contribution is as monumental, but whose stature remains so underrated.

In 1983 their first album, Script Of The Bridge, completely delivered on the promise of earlier single "In shreds". Oddly, it arrived in the US a full four tracks shorter than its UK forebear. Oddly, they released four of its songs as singles, and none of them was "Second skin". I suppose "Second skin" might not be an obvious choice on paper. It's almost seven minutes long. It's divided so cleanly that structurally it's two songs back to back. Originally it was an attempt to describe the experience of playing live in front of their fans, but somewhere along the way it turned into one of the few authentically mystical songs to ever grace the pop music canon.

I don't mean Stevie Nicks mystical, or "Aquarius" mystical. I mean mysticism in its truest sense: the pursuit of communion with, identity with, or conscious awareness of an ultimate reality, divinity, spiritual truth, or God through direct experience, intuition, instinct or insight. That's a tall order in any medium, which is why so few have even attempted it in the popular music format, and why even fewer have achieved it. I have a feeling Chameleons didn't intend "Second skin" that way, but I'm going to make my case for it here.

Our introduction to the song comes with a monophonic keyboard line, so slender, so unresolved that there's no telling where it leads. It comes to us through a mist, across a great distance, and it stays there for the rest of the song, weaving in and out of a much heavier instrumentation. The rhythm section is relentless; it is a forced march that keeps us a little off-balance by occasionally favoring the second beat of each measure, at other times the fourth. Two lead guitar lines (a Chameleons signature element) seem almost to ignore one another, each telling its own version of a somber story. And somewhere in this cavernous space, Mark Burgess tells his tale, at the start barely giving his words enough pitch to qualify as singing, but opening up into a rapturous bellow later. He is profoundly alone in this large space, even when he overdubs a harmonic vocal. He sings of a mysterious stranger, an escort, but that is what he is for us, the listener.

One cold damp evening, the world stood still. Every detail we receive is both poetically evocative and portentously vague. The first thing we learn from our narrator is that he has reached a moment that is singular: he holds his breath, and he is having trouble telling if he is asleep or awake. At the same time, he has a profound sense of past and present: his whole life flashes before his eyes, he feels like he's everywhere, he sees this fantastic moment as happening at just the right time in the context of the rest of his life - Fantasies are in this year.

This place of heightened awareness, of symbolic transition, is described by psychologists, anthropologists and ritual scholars as liminality. It is the rite of passage which enables one to cross a vital threshold in one's life. The liminal space is a space of ambiguity, indeterminacy and disorientation. It is also a space where conventional limits to thought and understanding are often removed, yielding new understanding and greater perspective. One emerges from the liminal space essentially as a new person - one who remembers the old self but cannot return to it; one who doesn't understand precisely how the change came about, but who is responsible for the change nonetheless.

Common symbols of the liminal space are littered throughout the lyrics.of "Second skin". The narrator is visited by a stranger who exists only in silhouette, who whispers in his ear. He sheds his skin, which he equates with a disguise, and with emerging from a cocoon. A half-remembered tune plays softly in his head, which I read as a discrete reference to Wordsworth's 'Ode: Intimations of Immortality', a poem that describes the flickers of memory children have of the world they inhabited before they were born. Most explicitly, he hears someone banging on his door, a clear invitation to open it and move through to the next place.

All of this is mysterious, and a little ominous, and it could easily be melodramatic and nothing more. But the arrangement and structure of "Second skin" ups the ante considerably by literally escorting us through this liminal space, along with the narrator. As the three minute mark approaches, he stops singing, and the guitars fall away. For a moment the skeleton is exposed: relentless drums, accenting the fourth beat. A guitar and the bass creep back in with tense eighth notes and a key change so organic it should be studied as the Platonic ideal of key changes. And then Mr. Burgess begins again.

I realize a miracle is due. I dedicate this melody to you. But is this the stuff that dreams are made of? His melody line goes higher than it had previously, and he repeatedly fills the words "stuff dreams are made of" and "no wonder I feel like I'm floating on air" with a vitality we haven't heard before then. And this is what cements the authentic mysticism of the song. Shakespearean references are not unheard of in popular music, but "such stuff as dreams are made on" comes from a central speech Prospero makes in The Tempest, in which he contends that we spend our lives seeking to shrug off a dream-like existence and emerge into a truer life. Our entire lives may well be a dream, which we very well might shrug off at death to emerge into a truer existence elsewhere.

All of this leaves our narrator in a rapture of conflicting emotions. He is exalted and wistful, somber but joyful; he is heavy with nostalgia but light with anticipation. And someone is banging on his door...

When you fail to make the connection you know how vital it is. When something slips through your fingers you know how precious it is. And you reach the point where you know it's only your second skin.

The gravity, the absolute force of insight in these words is well earned by the previous six and a half minutes. In the light of day all three of those sentences are platitudes. Here, in the cavernous dark with Chameleons, having been escorted across the threshold by our mystical guide, they are profound, spiritual, transcendent. They inhabit us as truths; we are changed forever.

And that is the object. It doesn't matter who the narrator was before this moment, or who he is now that it is over. "Second skin" is a four dimensional expression of what it is like to be in that moment, alone but connected to something greater than yourself; stripped bare but more complete than you've ever been; shaken but reconfirmed in everything you believe. It's tempting to assume that mysticism is something exotic and foreign, experienced by ascetics on mountain tops after years of deprivation. But the truth is that it is close by, just under the surface, ready for you whenever you are ready for it. I can give you no more succinct proof than "Second skin."
Chameleons official website
† †
Labels: STRANGERS IN OPEN CARS [songs you should know]
Newer Post Older Post Home