Bring on the night 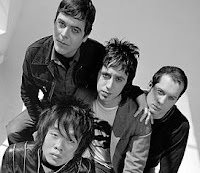 I'm a little confused by the reviews I've read for VHS Or Beta's recent album Bring On The Comets. Almost all of them use the adjective 'disco', which I just don't get at all. Particularly since the rest of those reviews usually run along the lines of 'Cure reference', 'Daft Punk reference', 'Duran Duran reference'... I definitely hear the new wave in VHS Or Beta, and I'm not going to say Comets is a great album. But this type of review makes me wonder at what point these prissy little critics stopped listening and rushed to judgment, reaching for their dismissive derivatives.

VHS Or Beta gave a great show last night, demonstrating that they are a tight unit, even with the recent addition of their fifth member. They play with a confidence that shows they are comfortable in venues much larger than the one where I saw them. Much of their set had an anthemic feel that I could imagine rocking an arena. They seem to have left behind the all-black-extra-zipper new wave image they used for Night On Fire, in favor of more comfortable, less image-conscious clothes (unless they're saving that for the larger venues, too.)

While I am fond of 'Burn it all down', their best song is still 'Alive'. (They seem to have noticed; they made it their first encore and it got the strongest response of everything they played.) That song proves that these guys are more than the sum of their influences; it can't be waved off simply by invoking U2 or Simple Minds. I'm not saying I don't hear the influence of those bands. I just don't like reading reviews that sound like the author's point of view can be summed up with the phrase 'Everything has been done before.' If that's how you feel, go be a hermetic scholar and leave the music for the people who are still capable of enjoying it.
VHS Or Beta official website
† †
Labels: LIGHTS IN THE WOODS [essays on special topics in music]
Newer Post Older Post Home