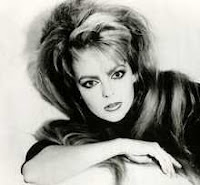 I was just settling into regular attendance at my first alternative club, and was still coming up to speed with the more obscure artists on the resident DJ's truly impressive roster. (That roster has become only more impressive in retrospect - with the resources of the internet about a decade away, and nothing resembling a big city closer than an hour's drive, I marvel at how Pete came up with those rare gems.) One of those early nights, I heard a song that belongs in the class of hits that conquered me from the very first encounter. I quickly learned that the artist was Danielle Dax, and the song was 'Big hollow man'.

She had been making albums for years, and had reached the point where signing with Sire and releasing a compilation could raise her profile; Dark Adapted Eye is her Songs To Learn And Sing, and it seemed to do the trick, relatively speaking. As smart and unique as she is, it's unfair that she didn't enjoy even greater success. Knowing her history as a musician who began performing before she actually learned to play any instruments, her work is all the more remarkable.

'Big hollow man' employs a little misdirection at the start. The syncopated strumming of guitars makes one wonder if a bluegrass clogging song might follow. But without any segue, the rock arrangement kicks in, and with it Dax's chorus, a nasal wail that could score her one of the witches' parts in Macbeth: 'Hey yeah / Walking in the valley of decision / Hey yeah / Reap all the wages of sin.' If she continued with that voice throughout the song, it would be altogether too much. But she steps down to an almost Nico-esque delivery for the verses, each of which is a gruesome little vignette about religious hypocrisy, so that when she returns to the wailing chorus, it makes complete sense as the bedrock of the song.

The first half of the first verse is sufficient to earn this woman a songwriting award. 'A big hollow man with a fistful of sham came a-walking across the sea / All leather and charms as he pinwheeled his arms and directed his gaze at me.' The internal rhyme scheme and an amazing collection of poetic descriptions paints quite a masterful picture. Ms. Dax is not on the side of the missionary, that's clear. And when the man opens his mouth to proselytize, it only gets worse...

The second verse, about a girl who endures incest from her religious father; and the third verse, about the destruction caused by a holy war, are good but not as great as the first. Nonetheless, in sum it's a real excoriation, a song that is completely satisfying as an infectious dance rock track, but that offers real depth and potency if one investigates the lyrics.

Others of her songs are more traditionally goth in nature. 'Cat house' and 'White knuckle ride' fit the category more neatly. But it's unfair to pigeonhole Danielle Dax that way (even though much of her visual presentation supports it); other songs like 'Whistling for his love' and 'Fizzing human bomb' show a broader range of influences, including ethnic drumming and psychedelic pop. (Later, she would cover Beatles' 'Tomorrow never knows'.)

Danielle Dax clearly used her inexperience to her advantage, making no assumptions and harboring no preconceived notions as she learned and created. Her dark and exotic aesthetic made for some fantastically underrated music that still sounds visionary.
[At the time of this post, a Danielle Dax official website is under construction.]

Addendum 11/01/09: Hat tip to reader Mark Douglass, who has pointed out to me that "the valley of decision" is actually a Biblical reference to Joel 3:14. This is precisely the kind of allusion that motivated me to write these essays in the first place. I pay lip service to the importance of the Bible in western literature, but this one escaped my notice. Thank you for the insight!
† †
Labels: STRANGERS IN OPEN CARS [songs you should know]
Newer Post Older Post Home