MOMUS - THE SADNESS OF THINGS 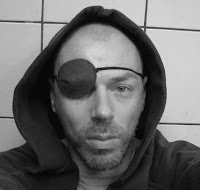 I had never heard of Momus, Nicholas Currie in everyday life, until 1996, when I heard 'The sadness of things' on a Cherry Red compilation. He doesn't seem to be very well known in the United States, and his controversial reputation might precede any of his music for those who have heard of him here. Sexual explicitness and perversion have a regular place in his work, and there is the matter of the seventeen year old Bangladeshi girl he married against her parents' wishes after they had dated a few years... It's fitting that Momus is the god of mockery and unfair criticism, the only in the Pantheon to be banished from Olympus for insubordination to Zeus.

A song that references 'The love song of J. Alfred Prufrock' is going to get my attention, but that doesn't guarantee that it's good. This song is mesmerizing, and truly melancholic in temperament, which is almost as rare an occurrence in pop music as T.S. Eliot references. One has to accept certain musical conventions of the nineties to enjoy 'The sadness of things', the same way one enjoys 'Sweet harmony' by Beloved, or 'Time to make you mine' by Lisa Stansfield. It's the saturation point of heavily synthesized pop, when sugary lushness was the ultimate goal, and there's genuine pleasure in that. The music was written by regular collaborator Ken Morioka; what sets the song apart from the formulaic pack is a philosophical, romantic (in the 19th century sense) and strangely affective lyric.

It begins with a hushed spoken monologue, a reminiscence filled with exotic images. 'I called you dancing queen at the Quai des Brunes / At Kamakura you said you'd like to paint tears on the neutral face of the Buddha.' Past and present are blended through colliding references to Abba and 13th century temples. The tears on the Buddha foreshadow the theme of the song: a phase shift from unbiased, unemotional objects to artifacts that hold meaning and sorrow just like living things, and the transformation of an active person to a sorrowful artifact.

What happened with this dancing queen? Momus continues to her: 'And for you when things go wrong / they go wrong for all the right reasons / And when it gets warm / you adapt with the seasons / In a world of changing colour / every colour has a meaning / And the universe exists for the convenience of your feelings.' Well, it doesn't seem to have gone well between them after their exotic trip through Europe and Japan.

The monologue doesn't openly allude to 'Prufrock', but an affinity is there - the combination of specific cultural references and intensely personal musings that resist interpretation. When Momus begins to sing, the tone shifts; now there are two direct quotations of 'Prufrock' ('I grow old', and 'Do I dare to eat a peach?') but we hear a more focused narrator meditating with greater accessibility. 'And as for me / I know a different world / A world where the sea / refuses to rage when boy loses girl.'

Like Prufrock, our narrator vacillates between self-absorption and a desire for universal truth. Is the 'world's indifference' really just an aggrandization of the disinterestedness of a lover? The cryptic first line of the chorus suggests so: 'Mono no aware / The sadness of things'. Even so, the melancholy is palpable, in the same way we are affected by a Rossetti painting or perceive sadness in toys cast aside, machines fallen into disrepair.

Generally, 'The sadness of things' is considered to be Momus's finest work; at least, it's been his biggest hit, reaching the top 20 in the UK. Its album, The Philosophy Of Momus, contains other Eliot references, and quite a few other highbrow allusions, and it's true that the music is not really an equal to these aspirations. But it's good enough, in this instance, to be a great pop song, which is all it is, after all. Momus's reach might exceed his grasp, but what's a heaven for? For a few minutes we are treated to a lovely, stylish, and sweetly pathetic (again, in the 19th century sense) lamentation.
Momus official website
† †
Labels: STRANGERS IN OPEN CARS [songs you should know]
Newer Post Older Post Home