A little bit not in love 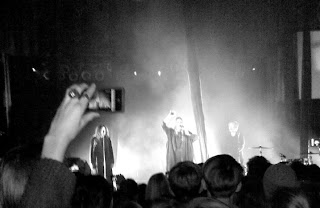 I wanted to see Lykke Li live, to the point that I drove three and a half hours to do it. Despite the fact that I've connected primarily with her singles and found her album tracks to be rather forgettable, I didn't have any reservations because she's racked up quite a few killer singles with just two albums: 'Little bit', 'Breaking it up', 'I'm good, I'm gone', 'I follow rivers', 'Youth knows no pain'... Even if the other half of the set list wasn't incredible, those songs alone would be worth the trip.
I think Lykke came out with the best of intentions, even if the taped music intro and accompanying light show was long and theatrical enough that for a moment I wondered if I had stumbled into a Pink Floyd tribute band by mistake. She started strong, and sounded great.
And then at some point, about a third of the way through, the edge seemed to come off.  I can come up with a number of reasons. The Orange Peel was quite full, if not completely sold out, but the audience was very uneven in its enthusiasm - there was some pockets of real fervor, but plenty of patches of low energy. Near the front there was an obscene number of people with cameras up, to the point that Lykke introduced a song by asking if everyone would turn their cameras off and just live in the moment.  It was one of the few times she addressed the crowd between songs, and while plenty of people cheered the sentiment, she came across as a bit dismissive. And it was Asheville, North Carolina after all - probably a prime candidate to phone in a show if an artist is running on fumes during a tour.
For one reason or another, by the halfway mark I was thinking at least once a song that Lykke was giving the impression she had more energy available to put into her performance than she was actually committing.  I could be misreading her - she obviously structures her show (staging, clothes, transitions, including a bizarre minute of drumming to a tape of the Knife's 'Silent Shout' that came out of nowhere and then left just as abruptly) to be on the edgy, dramatic side, and perhaps her attempts to look intense wound up making her look aloof. But there were plenty of moments when it felt like she was in a late stage rehearsal with the band, rather than a performance. My suspicions were only reinforced when she dropped her signature cover of 'Unchained Melody' from her encore, and gave us only one song.
So, in all, it was a bit unsatisfying, and I'd guess Lykke would say it was mutual.  In the meantime, though, she made some interesting choices, arrangement-wise. I can't say there were any home runs; 'Little bit' was overwrought and hard, losing its delicacy and playfulness. 'I follow rivers' managed to become monotonous, something I've never felt with the recording. 'Breaking it up' was missing completely. 'Youth knows no pain' was the solid rendition of the evening, but it came late in the set, and couldn't make it over the top.
I remember the New York Times review from a few months ago noticing the disparity between the toughness of Lykke Li's arrangements and the lightness of many of her lyrics, and I understand what they meant tonight. There seemed to be two dynamics: ballads done with minimal instrumentation and sophisticated harmonies, better suited for a theatre than a rock venue. The audience invariably whooped too much and too early, disrupting the moment and probably annoying Lykke. And then full bombast with few breakdowns - something easy to achieve with two drummers and as many as three other people doing percussive things at various times. I actually thought of industrial percussion ensemble Big Pig at one point; the banging was impressive, but ill-suited to the material.
I will continue to enjoy Lykke Li's singles; she shows much greater subtlety and sophistication in her recordings than I got from her live show.  I'm not closing the book on her as a live act, but I don't know that I'd drive three hours to see her again.
Lykke Li's official website
† †
Labels: LIGHTS IN THE WOODS [essays on special topics in music]
Newer Post Older Post Home