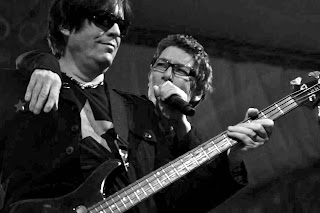 The Troika was not up for an away game this summer, so it was quite gracious of Psychedelic Furs to bring their Talk Talk Talk tour to us, here in Carrboro.  On the one hand, fewer adventures for the memoirs (I never would have thought a Troika night would end without some kind of swimming pool activity, for example).  On the other hand, without being too maudlin about it, we are all feeling particularly happy to be alive and kicking this year, so this felt just right.
I have to admire Psych Furs for their concept: celebrate the thirtieth anniversary of the release of an album off which most people only know one song (and that in a re-recorded version from a film soundtrack) by playing the entire album before getting around to any of the later hits for which 95% of the audience undoubtedly came.  It was a very effective strategy with me, because when I pulled out TTT this past week to brush up before the show, I rediscovered an album which I appreciate more now than I did when I first listened to it back in the late eighties.  (No, I was not a sophisticated enough eleven year-old in 1981 to catch TTT when it debuted.)
In 2011, TTT sounds like an absolute crucible of everything integral to new wave in 1981, which is no small feat.  Richard Butler's voice is the sound of a punk era singer admitting he fancies melodies, snarling through one song but doing his best to croon through the next one.  The sax parts aren't as punk as those recorded by Violent Femmes or early Romeo Void, but not as new romantic as those recorded by early Duran Duran or later Romeo Void.  The drums are as muscular as Budgie's.  There are no guitar solos to speak of.  At times the references go as far back as the paisley sixties. The lyrics are sometimes rude and sometimes thoughtful; the chord progressions are sometimes basic, sometimes ambitious.  Truthfully, TTT could be a very academic experience for a music historian, if it weren't so engaging.
Which is not to say TTT is timeless.  It is an ideal artifact of its time, but throughout the show tonight there was never any doubt that the material, played extremely faithfully by the band (of which only Richard and Tim Butler are originals), was thirty years old.  Richard sounds fantastic, not diminished in the least.  Lost single 'Mr. Jones' was an absolute rave-up, and should-have-been-a-single 'All of this and nothing' was a revelation - emerging all this time later as my new favorite track on the album.  Every track has classic new wave running through its veins, from the aggressive 'Dumb waiters' to the sweet 'She is mine'.
There were folks in the audience for whom it was an absolute treat to hear it start to finish, either because they had loved the album all that time ago, or, like I, developed a more recent appreciation for it.  The rest of the audience, however, got nostalgic to 'Pretty in pink' and then waited for the second half, when the later hits came out.
I didn't expect this, because I count 'Love my way' and 'Heartbreak beat' as quintessential Furs tracks, but the second half of the concert wasn't as fulfilling.  'Sister Europe' was another revelation, and the band gave almost studio-quality readings of all the singles they played, with the exception of the biggest hit of all, 'Heartbreak beat' - which somehow was lackluster and sluggish, a real disappointment.  Part of the oddness of the hits portion of the program was that certain hits were missing ('All that money wants', 'The ghost in you', 'House', 'Shock' - though that last one is no surprise, since Richard famously turned his back on it almost immediately) yet non-hits were included (despite its inclusion on greatest hits packages, 'President gas' remains a bizarre self indulgence, and 'Highwire days' is nothing more than an album track.)  'Forever now' was rather odd and completely unsatisfying as the final encore; overall the second half could have been edited and sequenced to much greater effect.
Still, witnessing Richard give an obviously personally fulfilling performance of Talk Talk Talk was a great experience.  Anyone who is tempted to dismiss new wave as an era of musical bon bons without substance or significance need only listen to Talk Talk Talk for an effective rebuttal.
Troika forever!