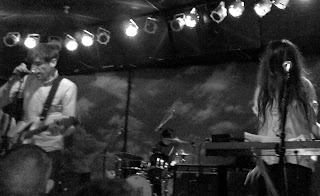 One of the abiding maxims of indie rock shows is that the live incarnation of the band will sound noticeably different from the recorded version.  There are any number of reasons: the band is the brainchild of one or two people who did almost all the recorded work, and then they had to figure out how to make it work live.  The band made certain concessions to a producer or a label in the name of commercial appeal, but are free to play the music as they envisioned it on the road.  The subtleties achieved in the studio had to be abandoned for a more conventional sound.  The sound at the venue is shitty, and suddenly they're a shoegaze band, whether they intended it or not.
Sometimes the band winds up sounding better live.  Sometimes worse.  Sometimes just different.  Usually more honest, because, hey, it's live.  I suppose my point is this: in a day and age when high quality digital recordings are available even to bedroom bands, live shows have become more than ever a different genre entirely.
I was happy to discover Pains Of Being Pure At Heart along with the rest of the internet a few years ago. The first album was good, and promising, and since then each single has been better than the last.  So I jumped at the chance to see them when they came to Cat's Cradle here in Carrboro.  Opening act Twin Shadow was an extra bonus, since I liked the two tracks that had received blog love last year.  It was a good show, though the theme of the night for me was how different these live acts are from their recordings.
On record, Twin Shadow has a spare, poppy sound with plenty of R&B shadings in the rhythm sections.  They gravitate to uncommon mid-eighties influences as disparate as later Japan and watered-down blue-eyed soul outfits like Curiosity Killed The Cat.  Live, they push into other categories of mid-eighties new wave, reminding me at times of later Gang Of Four, at other times of Killing Joke at their most melodic.  Their live version of 'Yellow balloon' morphed the uninteresting drum-sequenced album track into a hard-hitting Simple Minds anthem with ringing synth chords that made me wish they had recorded that version, instead.
POBPAH are fascinating to watch, if only because one wouldn't expect such a diminutive group of kids to rock quite so hard, or so tightly.  One adores Peggy in the same way one adores Janice in the Muppet Band; I'm not sure if I ever heard her keyboards, but her enthusiasm was infectious.  I've always been slightly confused by the band's comparisons to My Bloody Valentine and other shoegaze heavies, because their fuzz and feedback almost always have been confined to a supporting role on their recordings, giving them a much stronger affinity to Smashing Pumpkins.  But just like the Pumpkins, Pains unleash messier, if no less tightly played, versions of their tracks on stage.
That presents a challenge for Kip, whose thin tenor regularly got lost in the live mix.  (When he sang the first half of 'Heart in your heartbreak' almost a half-step sharp, I wondered if he was having trouble hearing himself, but he seemed to be on key for the rest of the show.)  And the teen angsty lyrics never really made it through.  But that doesn't mean all was lost; 'Young adult friction' is better live (even if 'Everything with you' is more forgettable).
My biggest disappointment came from what I didn't hear: 'Higher than the stars' and 'Say no to love' were conspicuously absent from the set list, and I know I wasn't the only one who noticed.  I can't guess why they didn't make the cut.  Kip took pains to praise Chapel Hill's indie rock scene, and Merge Records in particular, and the audience gave them plenty of love throughout the show, so I can't imagine they were phoning in an abbreviated version of the show.  Oh well.
With Twin Shadow I'm torn between their live and recorded incarnations.  I definitely prefer Pains Of Being Pure At Heart on their albums; live, I miss their melodic pop and dance elements.  But there's no doubt they could rock a stadium, if given the chance.
Pains Of Being Pure At Heart official web site
Twin Shadow official web site
† †
Labels: LIGHTS IN THE WOODS [essays on special topics in music]
Newer Post Older Post Home